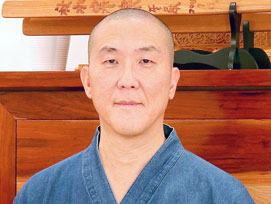 Guo Gu (Dr. Jimmy Yu) is the founder of the Tallahassee Chan Center, the founder of the socially engaged intra-denominational Buddhist organization, Dharma Relief, and a professor of Buddhism and East Asian religions at Florida State University. He was a monk for nine years and one of the late Master Sheng Yen’s senior and closest disciples. He is the author of The Essence of Chan (2012), Passing Through the Gateless Barrier (2016), and Silent Illumination (2021).

Guo Yuan Fashi, one of Chan Master Sheng Yen’s Dharma heirs, is a Buddhist monk trained in Chan Buddhism. In 1985 he first encountered Master Sheng Yen’s teachings while attending a seven-day retreat in New York. He then decided to become a disciple before finally leaving his job in Toronto, Canada, to become a monk in the Chan tradition. He was ordained in 1987 in Taiwan. For over twenty years, he accompanied and became translator to Master Sheng Yen in various Chan meditation retreats in the United States, the United Kingdom, Germany, Switzerland, Russia, and Mexico.

He studied Theravada Buddhism for a year in Thailand in 1991. Upon returning from Thailand, Guo Yuan Fashi was elected abbot of both the Chan Meditation Center (CMC) in Queens and the Dharma Drum Retreat Center (DDRC) in Pine Bush, New York. His responsibilities included attending interfaith services, teaching meditation, and giving lectures on Buddhism. In 2006 he became the director of the International Chan Retreat Center in Dharma Drum Mountain, Taiwan. In 2016 he returned to Pine Bush to become once again the abbot of DDRC. Fluent in Mandarin, Vietnamese, and English, he leads Chan retreat in many countries around the world.

Zarko Andricevic, is founder of Dharmaloka Chan Buddhist Community and Chan Retreat Centre in Croatia. Zarko first encountered Buddhism 1975 and has been a martial arts and yoga teacher since the 1970s. In the mid-80s he started the first Buddhist study and meditation group in Croatia. In 1996 he meet Chan Master Sheng Yen and become one of his students. Zarko received Dharma transmission from Master Sheng Yen in June 2001. Since then he is teaching and leading Chan retreats in Europe, USA, Canada, Taiwan and Australia. He currently lives and teaches at Chan Retreat Center in Croatia.